This is ‘Girl’. We’ve temporarily called her ‘Girl’ because she is yet to be officially named.

‘Girl’ is the smallest and youngest of our Lions of Lyon. Thought to be about five months old, she was being kept illegally but was surrendered by her owner in January this year, when she was just eight weeks old.

Sadly, ‘Girl’ was very unwell when she arrived at her temporary home in Lyon, France, where she is currently being cared for.

Poor ‘Girl’ had glaucoma. She also had extreme hair loss on her stomach and bald patches elsewhere on her body. She was also incredibly stressed, under-developed and underweight and had severe gastrointestinal problems, causing diarrhoea.

But ‘Girl’ is a fighter and with expert medical care is now doing much better. Her fur is growing back on her stomach and she is slowly gaining weight. Her health is improving daily and we expect her to make a full recovery in time. 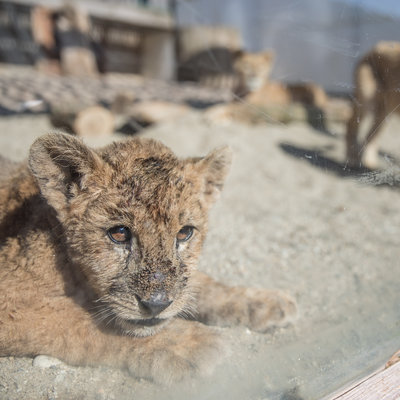 Maggie Balaskas, Born Free’s Animal Rescue & Care Manager, says: "Many of the health problems Girl was suffering from when discovered were likely to be associated with chronic stress, as a result of being repeatedly handled by her ‘owner’, kept in completely inadequate conditions and fed an inappropriate diet. Thankfully, with expert care, Girl is now recovering well.”

‘Girl’ is currently in a temporary home in Lyon, France, and now has the companionship of the three other Lions of Lyon to whom she was recently introduced to. You can help relocate all our Lions of Lyon to our big cat rescue centre in Shamwari Private Game Reserve, South Africa, where they will all receive lifetime care in a safe and natural environment.