If you visited Paris’ beautiful Champs-Elysées, you’d expect to see the Arc de Triomphe, theatres, cafes and luxury shops. What you wouldn’t expect to see is a lion. But that’s exactly what police officers found in the back of a green Lamborghini on this world-famous thoroughfare in November 2018.

Shockingly, police officers reportedly caught the Lamborghini’s driver taking selfies with a lion cub. The driver was arrested and the cub was taken into the care of French animal rescue charity Fondation 30 Million d’Amis.

That cub was Dadou. If his story sounds familiar, it’s because Dadou’s plight caused significant public outrage and was covered by media outlets across the globe.

Thought to be just two months old when found, Dadou was missing the tip of his tail. He also had weak hind legs because his muscles had not properly developed – possibly due to a poor diet. This is unsurprising considering that in the wild, lion cubs aren’t weaned until they are around eight months old. They would normally stay with their mother for at least two years.

Thankfully, Dadou has now fully recovered. The driver’s legal case is waiting to go to court. 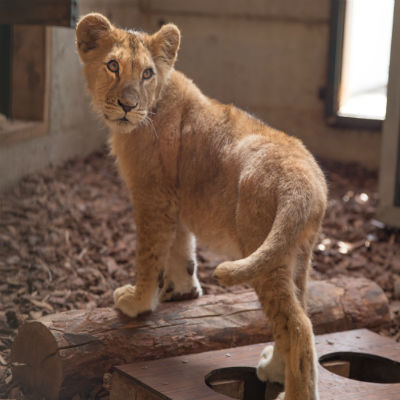 Maggie Balaskas, Born Free’s Animal Rescue & Care Manager, says: “It is incredibly distressing to see lions not only being traded and kept as pets in Europe, but clearly being used as props for taking photos and selfies – simply so their owners have something to share on social media. More work is needed expose the cruelty and suffering associated with wild animals being kept as pets to be exploited as photo props.”

We don’t know where Dadou originally came from or how he ended up in a Lamborghini in central Paris, but we do know that you can help give him a better future. He is currently in temporary accommodation with the three other Lions of Lyon in Lyon, France. You can help relocate them to our big cat rescue centre at Shamwari Private Game Reserve in South Africa where they can live free from harm in a safe and natural environment.