The Lions of Lyon were all found in captive conditions no wild animal should ever be subjected to and were destined for lives as pets. Here's why wild animals should never be kept as pets

The Lions of Lyon were all found in captive conditions no wild animal should ever be subjected to – an apartment in Paris, a garage in Marseille, even a Lamborghini on Paris’ world-famous Champs-Elysées – and destined for lives as pets.

Born Free opposes the keeping of wild animals as pets, and the associated trade in live animals.

Whether caught from the wild or born in captivity, wild animals have complex behavioural, social and physiological needs that can never be met in a domestic environment. As a result, wild animals frequently develop a range of physical and psychological problems when kept as pets.

The global trade in wild animals is estimated to be worth billions of pounds annually and involves millions of individual animals, many of which are destined to become someone’s pet. Wild animals are often bred in horrific captive conditions and fed completely inadequate diets, causing excessive levels of stress and significant health problems. Others are caught from the wild and transported great distances, many of which suffer and die in transit before they reach their final destination. 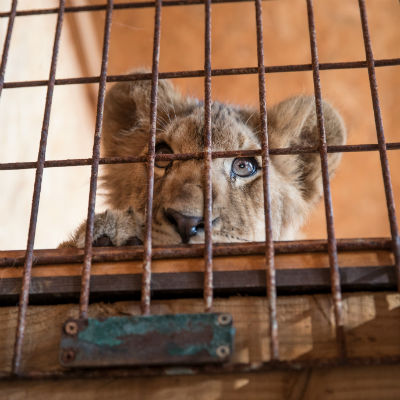 Many species kept as pets are potentially dangerous. Regardless if they have been bred or kept in captivity, wild animals retain their natural instincts and can be unpredictable. They can inflict serious injury and or transmit diseases which can be harmful to both people and domestic animals. There have been numerous incidences of exotic pet attacks around the world, resulting in serious human injury or death.

Maggie Balaskas, Born Free’s Animal Rescue & Care Manager says: “It’s incredibly concerning that lion cubs continue to be traded and kept as pets in Europe. Six lion cubs have been discovered being kept illegally as pets in France over the past five years – and these are only the cases which Born Free are aware of. Worryingly, this could be the tip of the iceberg. Providing a happier future for the Lions of Lyon is just a small part of the solution. More work is needed to tackle the exploitation of wild animals being traded and kept as pets.”

Born Free investigates and exposes the exotic pet industry and challenges both the legal and illegal trade in wild animals. We campaign for national and international legislation to reduce and, where possible, end this practice.

Just like the Lions of Lyon, we rescue individual animals from appalling conditions where they have been confined, exploited or abused to supply demand. We provide them with lifetime care in sanctuaries where they live in spacious natural enclosures, or – where possible – return them to life in the wild.

You can help give the Lions of Lyon a lifetime home at our big cat sanctuary in Shamwari Private Game Reserve in South Africa, where they will be able to live undisturbed in a safe and natural environment.