We do not know where our four Lions of Lyon originally came from, but it is thought they could have been traded as surplus from the circus industry. Find out why Born Free is wholly opposed to the use of wild animals in circuses

We do not know where our four Lions of Lyon originally came from, but it is thought they could have been traded as surplus from the circus industry.

Globally, thousands of wild animals are used in travelling circuses and forced to perform demeaning and unnatural tricks to entertain the public. This practice continues, despite increasing public opposition, in several countries in Europe.

Born Free is wholly opposed to the use of wild animals in circuses and considers the practice to be unethical.

There is overwhelming evidence of compromised animal welfare in the circus environment. Our position is consistent with the increasing number of local and national jurisdictions that have banned the use of wild animals as a result of these concerns.

In France, where the Lions of Lyon were found, there is currently no nationwide ban on the use of wild animals in circuses. However, there are local bans in 65 municipalities. This includes Paris, which voted for a ban in December 2017 following the escape of a tiger from a circus in November 2017. The tiger entered a train station and was shot dead by police. 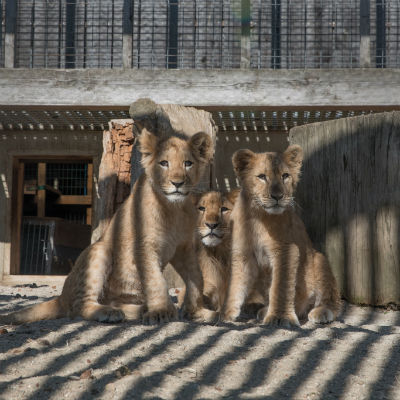 Animals used in circuses can experience both mental and physical suffering. Restrictive space and boredom from lack of environmental complexity can cause individual animals to develop unnatural behaviours. They may contract diseases from unhygienic and inappropriate conditions or suffer from deficient diets.

Performance may be one of the most stressful aspects of a circus animal’s life. Animals are usually made to perform tricks that have nothing to do with their natural behaviours. Some activities may lead to animals developing serious health problems.

The transportation of wild animals from location to location, their temporary and often inadequate housing, the close proximity of animals to people during performances and the practice of parading animals through towns are a serious risk for accident or escape.

Animals in circuses are also allowed to breed, either to replace animals that have become too old to perform or have died, or to sell as a source of additional income. Animals might be traded or sold into many situations, including into the exotic pet trade.

“The use of wild animals in travelling circuses persists despite an increasing awareness of its problems," says Dr Chris Draper, Born Free’s Head of Animal Welfare & Captivity. “There is an urgent need to secure the welfare of wild animals that are being used in, or discarded from, the circus industry. The only way to stop the suffering of animals in circuses is to ban the practice once and for all.”

We may not know how our Lions of Lyon came to be found in an apartment, a garage and a Lamborghini, but we do know that, with your help, we can give them a better future at our big cat sanctuary at Shamwari Private Game Reserve in South Africa.