Ciam the lion made international headlines in November 2015 when he was confiscated from a cage in a garden in southern France. Kept illegally as a pet, Ciam had reportedly lived in the cage for seven months after his owner received him from a friend who worked in a circus.

In May 2017 – thanks to the generosity of our supporters – he was given a lifetime home at our big cat sanctuary at Shamwari Private Game Reserve in South Africa.

Two years on, and we are preparing to relocate the Lions of Lyon to Shamwari, four illegally kept lion cubs also found in France.

Today, Ciam is relaxed and content. His favourite spot is sitting on top of his platform surveying the land, however, when it is hot he likes to lie under a shady tree next to his water trough. He has grown in to a big handsome lion, and his mane has darkened. 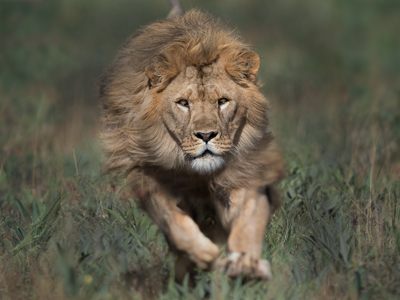 Catherine Gillson, Born Free’s Manager at Shamwari says: “Ciam has the inquisitive nature of a young lion. He can’t help himself when there is movement around his enclosure and he comes to investigate. His carers know not to invade his privacy when he has a piece of meat though.

“The space and respect he has been given at Shamwari has certainly re-ignited his innate wild being that was suppressed for so long as a cub,” adds Gillson.

Wild animals kept as pets, like Ciam and our Lions of Lyon, are often considered to be status symbols by their owners and also used as photo-props in selfies for posting on social media sites.

Maggie Balaskas, Born Free’s Animal Rescue & Care Manager says: “Ciam is one of six lions that has been discovered being kept illegally as pets in France over the past five years – and these are only the cases which Born Free is aware of. We were delighted to provide Ciam with a lifetime home at Shamwari, but providing a happier future for these lions is just a small part of the solution. More work is needed to tackle the exploitation of wild animals being traded and kept as pets.”