LIONS OF LYON – THE NEXT CHAPTER!

In 2019 we successfully relocated Thea, Cersei, Horus and Dadou 8,000 miles from their temporary accommodation in France to their forever home at our big cat sanctuary in South Africa.

We watched as the four cubs, all survivors of the exotic pet trade, emerged from their travelling crates onto African soil for the first time, and enjoyed seeing them grow in stature and confidence thanks to the expert care of the team at Shamwari. Thea and Cersei were also introduced to new companions, King and Ciam! But what happened next?

The smallest and youngest of the cubs, Thea had an appalling start to life and was underweight and in poor health when she was surrendered by her former owner.

Since arriving at Shamwari, Thea’s has transformed! In September 2020, we introduced her to King, another young lion rescued from an abusive private keeper in France, and the pair have formed an inseparable bond. Inquisitive Thea loves to relax on her viewing platform and take in her surroundings, often with loyal King by her side. Thea and King share a love of food, and both have very healthy appetites! They also love to play hide and seek together and can often be heard practicing their roars! 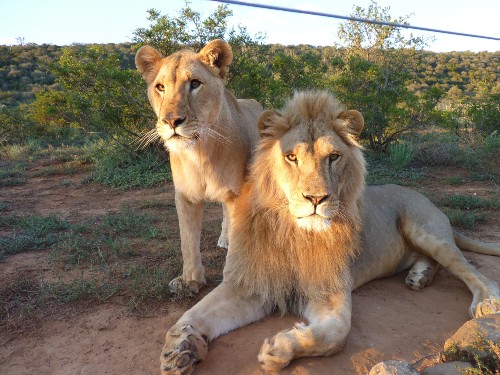 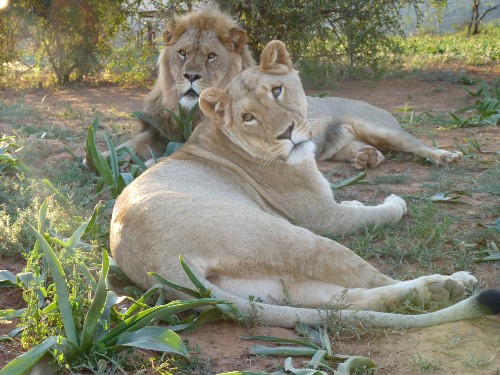 Cersei was found in a garage in Marseille, underweight and with a variety of health problems due to the inappropriate care and unsuitable diet she had received from her owner.

In October 2020, Cersei was introduced to Ciam, who had been kept illegally as a pet and caged in a garden in southern France, before being transported to Shamwari in 2017. The two young lions are in their element together and have a warm and affectionate bond. The pair enjoy lots of contact – head rubbing, washing each other, then loudly purring. However, Cersei knows to keep her distance from Ciam when it comes to meal times, as Ciam collects his food first and runs off to hide in the bushes to eat. Cersei then retrieves her meal and eats it in the night enclosure. Once they’ve finished dinner they reunite for the evening!

Horus was in reasonably good health when he was discovered on a child’s bed in an apartment on the outskirts of Paris, after his owner posted images of the cub to Snapchat. Dadou was found on Paris’ Champs-Elysées – in the back of a Lamborghini. His owner was caught by police officers taking photos with the cub, who had lost the tip of his tail and was suffering with muscle weakness in his legs.

The young males have remained together since arriving at Shamwari, and are both thriving! Horus is very curious by nature and any movement near to their enclosure calls for a closer inspection! Dadou is growing more confident, but still prefers to watch activity from a safe distance. Nonetheless, he is an affectionate lion; he loves playing and cuddling with Horus who is the more dominant of the two.

Both lions enjoy their food very much, and are kept separate at feeding time to avoid any disputes! The team are looking forward to the day they find their voices and can join the others in roaring chorus. 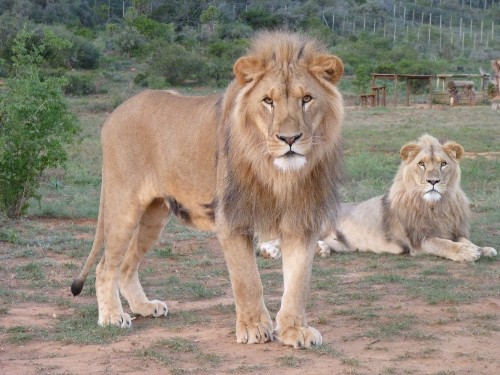