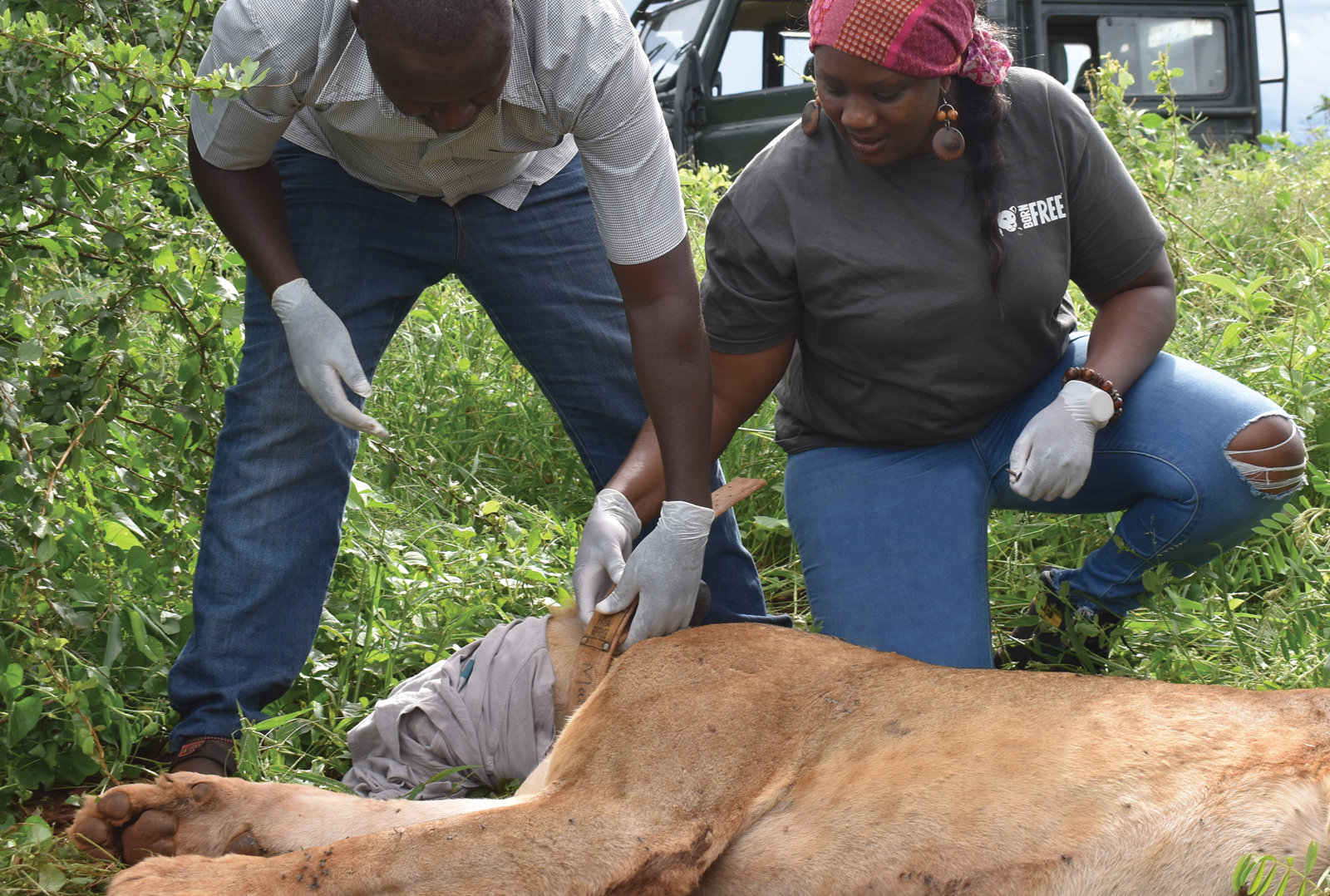 There is an estimated population of 60-80 lions in Meru National Park, roaming an area of 870 km2. To help safeguard their future and understand more about them, we regularly track and monitor individuals using GPS radio collars.

What is a radio collar?

A radio collar is a belting fitted with a radio transmitter and battery. The transmitter emits a signal at a specific frequency that can be tracked up to 5kms away. The collar is designed to minimise impact on the animal’s behavior, yet maximise detectability.

Why do we collar lions?

Lions can be quite elusive due to their tendency to inhabit large territories and hide in dense vegetation or rough terrain. Meru National Park has dense vegetation with small patches of open savannah, making it difficult to study and track lions. In order to monitor the lions on a regular basis, we rely on radio telemetry; we are able to study habitat selection in different seasons and prey preferences. Since movement is closely tracked, there is an element of protection, keeping them from straying into areas where they are in danger of conflict with humans, and retaliations.

How do we fit a collar?

Collaring needs close supervision to ensure the safety of the lion throughout the procedure, all lions are therefore treated by a Kenya Wildlife Service (KWS) vet. The lion is darted with a sedative and monitored; body temperature, heart rates and respiratory rates are recorded. Once the lion is immobilised, the collar is fitted. We also record measurements and take a set of biological samples ie blood, urine, saliva, ticks, to determine the lion’s physiological status. On completion, the vet administers a reversal injection and we observe the lion until it is awake and on its feet again. We only drive off once we are satisfied the lion is secure enough to be on its own and able to defend itself again.

So far, we have deployed two collars, one on a male called Solio and the other on a female called Kagendo.

Solio was collared in September 2019. It was a well co-ordinated activity; a team of two put the collar round Solio’s neck and assessed the perfect fit. Once the perfect length was determined, the collar belt was cut and fixed on Solio with the battery unit facing the ground. Other team members recorded teeth, paw and body measurements, while the vet did a thorough check of Solio’s health status, body temperature, heart and respiratory rates.

With all the team members back in their respective cars, the antidote was administered. Within 10 minutes, Solio recovered sufficiently and walked off. We stayed with him for an hour to make sure he was in a stable condition and safe from other predators.

Between September and December 2019, we received heavy rains in Meru National Park. The dry park turned green with thick undergrowth. With poor road accessibility, tracking and sighting lions became a mammoth task. Our plan was to deploy a collar on one of the four females of the elusive Virginia Pride.

In December 2019, we collared Kagendo. She belongs to Virginia’s Pride and was found with the rest of the pride resting in a tree. She was darted by the vet and after a few minutes, we were able to place the collar around her neck and record biometrics. The vet administered the antidote and about 15 minutes later, she was on her feet again.

Thanks to the dedication of our Pride of Meru team, and the KWS colleagues they work with, the future looks bright for the lions of Meru.