This year has been interesting for lion conservation and management in Meru National Park. We have seen at least four of the six known prides we monitor with cubs.

Five months ago, two lionesses were moved into Meru from the neighbouring Sericho area by Kenya Wildlife Service following the community’s outcry. With other lions, they had been prowling the community land next to Meru. These lionesses have since moved to Kinna-Rapsu area just outside the northern tip of Meru. One lioness was collared for ease of monitoring, although the collar loses signal as it uses GSM technology. The lioness is nomadic, roaming the expansive community grazing area of about 809km2.

Last month, the collared lioness of the G-coy pride – one of the Meru Park prides that we monitor regularly – moved out of the protected area and inched close toward the collared Sericho lioness in Kinna-Rapsu. There was no indication of physical interaction between the two. The G-coy lioness moved back into Meru after a day in the community area and has returned twice.

Born Free Kenya regularly reaches out to the neighbouring community to promote tolerance, co-existence and vigilance to ensure incidences of conflict do not escalate to toxic levels.
Besides the known lion prides of Meru having new cubs, eight lions were moved into Meru last month – a sub-adult male aged about two years old, and seven adult lions (three females and four males). These lions came from a ranch in Laikipia County, north west of Meru near Mount Kenya National Park, and had prowled into residential homes and community land leading to rising conflict incidences and losses. One male and one female have been collared for ease of tracking. So far, almost all the relocated lions have been sighted within Meru and seem to be adapting well in their new home.

Our team on the ground is monitoring the newcomers as they also continue tracking the known prides to understand their behaviour and dynamics. In future, all aspects of such relocations and their probable impact need to be taken into consideration from an ecological, social and political context.

As the Meru lion population grows, whether naturally or by human intervention, we do hope that the latest lions will not stray into the neighbouring community areas. Thankfully, Meru has plenty of prey and the expanse area is suitable for lion conservation and management. 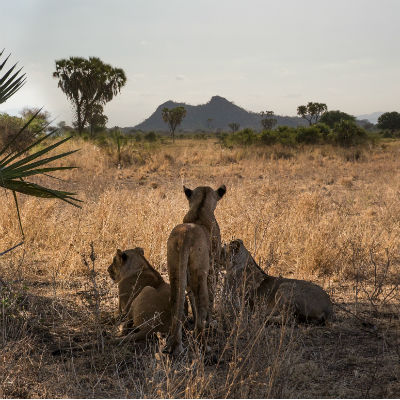