Sami was found abandoned in the Sudanese bush, thought to be just four months old. Rhea was born in captivity and rescued by Born Free following a long-running campaign. Mowgli and Zeiss were rescued from a failed zoo. Sadly, the nature of their background means they would be unable to fend for themselves if released into the wild, so they are given expert, lifetime care in a spacious, safe and natural environment.

The Leopard Family enjoy bush enclosures several acres in size which are full of shrubs, trees and undergrowth to explore and shelter in. They also have specially-built platforms to view the hills and gullies at Shamwari. Predators need a good view of their surroundings for their mental well-being. Sadly, this is rarely catered for in zoos and can lead to compulsive, stereotypic behaviour.

Leopards are really adaptable and found in both savannah and forest environments. They have the widest range of any species of cat in Africa and Asia, but many populations in the wild are under threat due to poaching, habitat loss and competition with humans for space.

Leopards have a long tail and body with relatively short legs compared to other big cats, but can still run at up to 36mph. They are skilled hunters with lightning-speed reactions; aided by their camouflaged fur, big skull, strong jaw, acute hearing and excellent eyesight – six times better than humans. They are also superb climbers and often drag their kill into trees out of reach of other predators.

Rhea is the oldest of our big cats at the sanctuary, but still in good condition. Sami is the most sociable leopard and enjoys greeting visitors. Both leopards have lived at the sanctuary for a number of years, but Mowgli and Zeiss only arrived in April 2020. They have settled in well but are quite timid and nervous of people.

Maggie Balaskas, Born Free’s Animal Rescue and Care Manager says: “When temperatures are hot, the leopards spend a lot of their time under the trees enjoying the shade, appearing now and again to have a drink from their water troughs. They also enjoy climbing as high as they can on their jungle gyms, before relaxing and having a snooze in the sunshine. Now and again, they stir from their sleep, open their eyes and have a good look around – before dozing off again.”

Help Born Free continue to look after the Leopard Family by adopting them today. 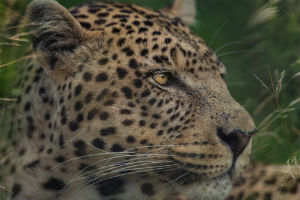 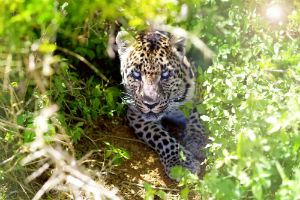