Kyriakos is one of the biggest bears living at the Born Free supported-Arcturos Bear Sanctuary in Greece, and his favourite activities are eating and sleeping!

Kyriakos and his brother, Manolis, are brown bears. They were born in the wild in northern Greece but sadly their mother was killed when they were just four months old. They would have had little chance of survival without their mother’s protection and care. Naturally brown bears will stay with their mother for at least the first two-and-a half-years of their life.

Fortunately a kind-hearted shepherd found and cared for them for a few months and now they have a lifetime home at the Arcturos Bear Sanctuary.

Brown bears are found across North America, Europe and central Asia. Bears are known to have large brains compared to their body size and their intelligence is widely acknowledged.
After a couple of years, Kyriakos and his brother were gradually introduced to the other bears, which are mostly rescued former dancing bears, a cruel form of ‘entertainment’ which has thankfully now ceased in Greece.

Come autumn the bears start to dig their dens and prepare for their long winter sleep when temperatures can drop to below zero. Interestingly, they do not fully hibernate, but go into a deep sleep from which they can be easily woken. They will continue to dig in the earth finding comfortable sleeping positions, but will awake as soon as spring arrives. While sleeping, bears can go for over 100 days without food or water so they need to build up their reserves beforehand.

Maggie Balaskas, Born Free’s Animal Rescue and Care Manager says: “During autumn Kyriakos will eat around 12kg every day, with a balanced diet that includes apples, apricots, various vegetables, bread, eggs and fish. However, the size of his meals will increase as winter approaches.”

“With all the digging and eating, Kyriakos still manages to find plenty of time to relax. During the hot summer months he kept cool with lots of long lazy baths in his pool,”  Balaskas adds.

Kyriakos enjoys exploring his forest enclosure and is curious to investigate any new sights and sounds.

By adopting Kyriakos you will be helping Arcturos to give him and other rescued bears the lifetime care they deserve. 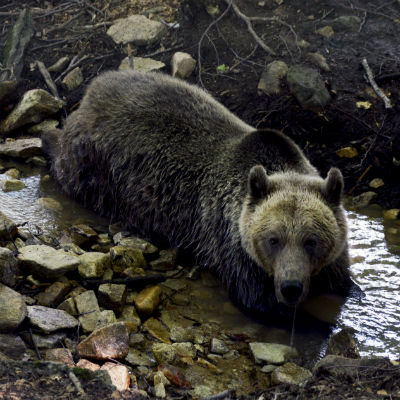