Born Free is supporting our colleagues at Jaguars in the Fringe as they monitor and protect the beautiful Jaguar Family in the Yungas, in north west Argentina. This dedicated organisation is doing everything it can to safeguard the future of these remarkable big cats and promote the future expansion of their range.

The jaguar is the largest predator in the Americas, found from northern Mexico all the way to Argentina. The rugged terrain of the Yungas – a narrow band of forest along the eastern slope of the Andes Mountains – is home to the world’s southernmost population of jaguars and has the potential to act as a source to recolonise other habitats where jaguars once roamed. With a rainy, humid climate, the Yungas range from moist lowland forest to evergreens and cloud forests. As well as being home to the Jaguar Family, a huge range of animals live here, including spectacled bears, tapirs, jaguarundi and armadillo. Many species are found nowhere else in the world.

Jaguars are closely related to lions, tigers, leopards and cheetahs. Although they resemble leopards in appearance, the jaguar is larger, stockier and its rosettes have spots inside them.

Like the tiger, jaguars enjoy water and are good at swimming. They have a very powerful jaw, and can bite with even more force than a lion. The jaguar stalks and ‘ambushes’ its prey, often leaping into water or from a tree.

Sadly, although fully protected by law, the Jaguar Family is under threat from habitat loss, degradation and fragmentation, lack of prey species and persecution from people.

Since 2011, Jaguars in the Fringe has been working with local communities and government to reduce these threats and encourage the expansion of the jaguars’ range – which has historically halved – by recolonising habitats where these big cats once lived. Dr Liz Greengrass, Born Free’s Head of Conservation, explains: “As their habitat reduces, the once continuous jaguar population is being pushed into smaller pockets of habitat.”

Jaguars in the Fringe works with local government agencies and private landowners to help them more effectively protect wildlife and encourage the recovery of prey animal populations, through the Jaguar Strategic Conservation Plan for the Yungas. Through education and improved husbandry practices, they stop ranchers from killing jaguars in retaliation for preying on their livestock. Outreach activities help to reduce poaching and change local attitudes to protect the jaguars and support conservation efforts.

Dr Greengrass adds: “A region-wide camera trap survey monitors the jaguars and it’s hoped that by encouraging new husbandry practices there will be less grazing pressure on the forest, which in turn will lead to a recovery of the jaguar’s prey base and less attacks on livestock.”

By adopting the Jaguar Family you will be supporting this vital work.

ADOPT A JAGUAR     SAVE A LIFE 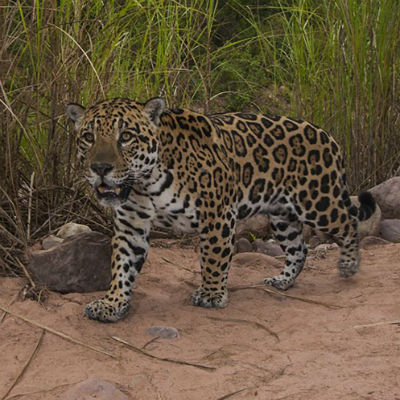