GLIMMER OF HOPE FOR GREVY’S ZEBRA IN MERU?

Towards the end of last year, we recorded the birth of a Grevy’s zebra in Meru Park. This was great news in all levels as this distinct species is rare in this wilderness. Only six individuals are found in this Park according to the results of an aerial census conducted in the greater northern area (Laikipia-Samburu-Meru-Marsabit ecosystem) in November 2017. The other recorded birth had been earlier in the year but the foal was predated on within the first month.

Grevy’s zebra are mainly found in the semi-arid northern Kenya, mainly Samburu and Laikipia and are the most threatened of the three species of zebra. They roamed in Meru in the 1970s and 80s but by early 90s, they and many other wildlife had been decimated when the Park was overrun by bandits. In the early 2000s, an ambitious project was initiated to restore the Park and one main area of focus was to restock wildlife. Together with elephants, rhinos, lions and giraffe, hundreds of ungulates were relocated from other regions of the country to Meru between 2000 and 2007 in a bid to revamp the biodiversity. Some 30 Grevy’s were among these ungulates. Their brave behaviour when confronted by carnivores has seen the numbers reduced over time due to predation.

Since this latest new birth, we have been monitoring both mother and foal with the latest sighting being a week ago. Almost four months down the line, both are doing well. Despite their current population in Meru not being viable, we still hope that the young one will survive and thrive in this wilderness 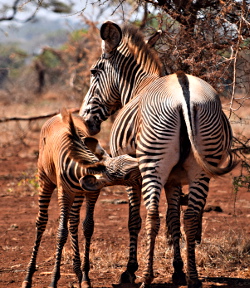