GO FAKE FOR THE BEAR’S SAKE

Born Free supported a reception held by PETA in Parliament on Monday 25th April to focus MPs attention on the need to end the use of bear fur for ceremonial hats in the British Army. The event was hosted by John Nicholson MP and brought together Ministers, Shadow Ministers and back bench MPs from all political parties. Attendees included Defra Minister Lord Goldsmith, Shadow Minister for Armed Forces, Luke Pollard MP, Shadow International Trade Secretary Emily Thornberry MP and Sir Roger Gale MP Patron of the Conservative Animal Welfare Foundation.

Born Free Patron and TV presenter Kirsty Gallacher opened the event by calling on the Ministry of Defence to embrace the fur faux alternative ceremonial hat created by PETA and ECOPEL. Kirsty said "I care about animals, and I believe, quite simply, that fur belongs to the animals who were born with it. Tradition is no excuse for violence, and by embracing this faux fur alternative created by PETA and ECOPEL, the Ministry of Defence would allow this national symbol to endure in a way that reflects modern society and its values.”

The CEO of luxury faux furrier ECOPEL Christophe Sarfati also spoke at the event and brought along an example of the faux fur alternative ceremonial hat produced for the cold stream guards based on the specification set by the Ministry of Defence. Christophe said "A viable and humane faux bear fur has been tried and tested and is ready to go. ECOPEL has offered the MoD an unlimited amount of the material free of charge until 2030 – a move that could save over £1 million of taxpayer money. ECOPEL’s fabric meets all the MoD’s requirements: it matches the exact length of real bear fur, is 100% waterproof, and performs similarly in ‘water shedding’, drying rate, and compression tests."

Dominic Dyer, Born Free Policy Advisor made a powerful speech looking at the brutal reality of the hunting of black bears in Canada by trophy hunters. Dominic said "Bears are killed in Canada primarily as a consequence of human wildlife conflict and the killing is largely carried out by trophy hunters. Every year thousands of black bears are shot with high powered rifles or bows, many suffer long painful deaths as result of blood loss, organ failure or starvation. 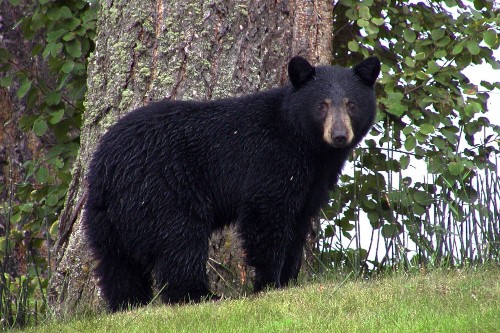 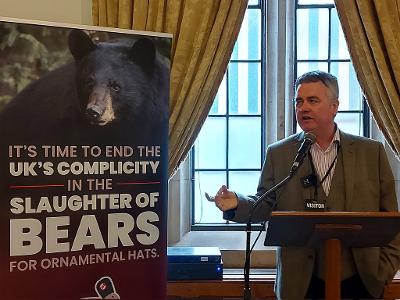 The trophy hunters generate income by the selling the pelts of the bears they have killed to auction houses and British tax-payers are supporting this cruel business as a result of these pelts ending up as ceremonial hats in the British Army."

Kate Werner from PETA closed the event with a call for the public to sign the Government petition calling for an end to the use of bear fur hats in the British Army and for MPs of all Parties to call on the Government to adopt the ECOPEL faux fur alternative product that will save bears and public funds.