THE GIRAFFE IN THE ROOM

The Giraffe Conservation Foundation (GCF) works to conserve all species and subspecies of giraffe, including the West African giraffe in Niger.

Once distributed across west and central Africa, it is estimated that there are only 600 West African giraffe, making them the rarest subspecies of giraffe. This population lives close to the capital of Niger meaning their environment is dominated by agriculture and settlements. With the support of Born Free, GCF has been monitoring giraffes in Niger for several years and we are pleased to report that during their challenging wildlife surveys in 2018, 168 West African giraffes were sighted, a snapshot of the population.

These giraffes are difficult to find, but Born Free is excited that 22 new calves were sighted during the survey. Each individual is critical to the survival of the West African giraffe.

The work of GCF is critical to understanding the distribution of giraffes for their better protection. Whilst the population and range of this subspecies of giraffe is increasing, others are declining rapidly. 150 years ago, there were two million giraffe, but today there are just 80,000 giraffe left in Africa. For example, the Masai giraffe population has declined massively, halving in just three decades to around 32,500 individuals. Until recently, very few conservationists knew about their decline. Giraffes were, and still are to some degree, experiencing a silent slide towards extinction.

Why are giraffes declining?

Their decline is associated with a number of threats, including habitat loss, poaching, the bushmeat trade and human-wildlife conflict; a list that Born Free is all too familiar with.

The main threats to the West African giraffe in Niger are road accidents and conflicts with farmers who hunt giraffe with sticks, stones or even machetes when they raid crops. Unfortunately, during the GCF survey, a seven-month-old giraffe was hit by a truck, which highlights the danger of traffic to giraffes.

In addition, due to infrastructure development, agricultural expansion, urbanisation, mining and an increase in human settlements, the habitat of the giraffe all across Africa has declined. During their survey, GCF noted excessive cutting of firewood, degrading West African giraffe habitat. Habitat loss has contributed to the disappearance of giraffes from seven countries: Burkina Faso, Eritrea, Guinea, Malawi, Mauritania, Nigeria and Senegal.

The sedentary nature of giraffes makes them an easy target for poachers and due to their slim long necks and legs, giraffes frequently become caught up in snares. Weighing over 1,000 kilograms, a giraffe offers a considerable amount of bushmeat for very little effort.

Whilst the lure of bushmeat is tempting for poachers, there are also other incentives to kill giraffes. For example, in Tanzania, some people believe that giraffe brains and bone marrow can protect against and cure AIDS. Tails are also harvested for ornaments and gifts.

A report by Humane Society International has revealed the insatiable appetite for giraffe products in the US. 40,000 items including 21,000 giraffe bone carvings, 4,000 raw bones and 2,000 bone pieces, as well as 700 full skins and 3,000 partial skins were imported to the US between 2006 and 2015. These items were used to make hats, boots, bags, cushion covers, bracelets and even bible coverings. To meet demand, on average, more than one dead giraffe is legally imported into the US every single day, predominantly by American trophy hunters, contributing to their decline.

There are fewer giraffes alive than elephants and so a burning question arises: why did conservationists not realise that giraffes were declining? Did the decline of the elephant, rhino, gorilla and tiger consume our attention and blinker us from the plight of the giraffe? Is the giraffe so recognisable, distinctive and depicted so widely in the media that their presence was taken for granted?

GCF, however, are aware of the challenges facing giraffes, and with Born Free, is working hard to make sure that they survive and thrive. 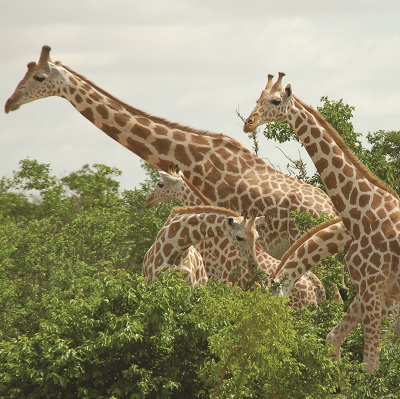