Situated along the Dângrêk escarpment heading to North Eastern Thailand, the Dong Phayayen – Khao Yai forest complex (DPKY) is one of the largest contiguous tracts of forest in the country. It is also home to a population of endangered Indochinese tigers and a designated World Heritage Site.

The Indochinese tiger has been decimated across almost all of its natural range – becoming a ghost of the forest. Perhaps less than 200 individuals remain in Thailand. No viable breeding populations remain in China, Cambodia, Lao Peoples' Democratic Republic or Vietnam. The survival of the Indochinese tiger is uncertain.

Nonetheless, the tigers that live in the DPKY complex give us hope because they are one of only two remaining breeding populations. Our partners at Freeland Foundation, a counter-trafficking organisation, have been working in the DPKY complex for nearly 20 years, closely monitoring and protecting this small, but critical population of tigers.

The Indochinese tiger, just like so many other large mammals, is highly threatened by poaching and habitat loss. Poaching networks operate along the Thai–Cambodian border, but there are rangers who are ready to protect the biodiversity of DPKY. 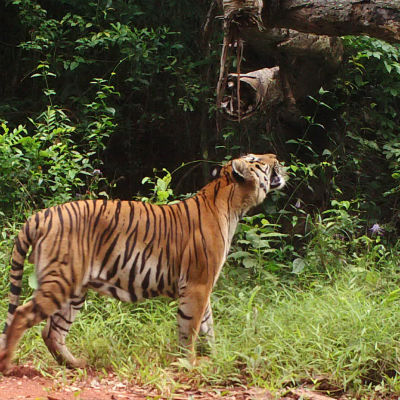 Thailand’s Department of National Parks, in partnership with Freeland, initiated the Hasadin unit (derived from the Sanskrit word for elephant). These highly trained rangers are the front-line in the fight against tiger poaching.

However, their work does not stop there. An influx of well-organised loggers has presented challenges to this elite team, exaggerated by the involvement of armed Cambodian poachers, some of whom have journeyed the width of Cambodia and then 100km into Thailand to poach wildlife and log Siamese rosewood. This high value timber used for Chines Hong Mu furniture is claimed to be one of the world’s most trafficked forest product. Just as with the Indochinese tiger, rosewood has been extirpated from Lao Peoples' Democratic Republic, Cambodia and Vietnam. Illegal loggers may soon turn to poaching tigers as another high-value ‘product’.

The deadly nature of working in this environment cannot be underestimated. Gun snares are regularly found along the park boundaries, set by villagers to catch wild boar and other wildlife to supplement their diet, but also in an attempt to reduce the amount of crop raiding. These gun snares fire 12-gauge shotgun cartridges and are indiscriminate, injuring elephants, domestic dogs, and sometimes even villagers and rangers.

Although the challenges of protecting wildlife in DPKY are great, Freeland is working hard to understand the ecosystem and uncover the secret lives of tigers. Freeland places camera traps throughout DPKY to monitor the population, adding to our knowledge base for this subspecies. Through camera-trap images, individual tigers can be identified by their unique stripe patterns, allowing researchers to track them continually. In 2016, six tiger cubs were recorded and Freeland were excited to announce that they have all survived to adulthood – an amazing achievement. These young tigers inhabit areas in DPKY once depleted of prey; thanks to the efforts of organisations working in this landscape, including Freeland, they are now thriving.

Freeland is constantly adapting to new and old threats. Poaching and logging in protected areas are not easily eradicated, but the work of organisations like Freeland play a critical role alongside protection agencies and law enforcers in stemming wildlife crime. Born Free is proud to support this vital work.