Although most closely related to the grey wolf, the Ethiopian wolf is more like a fox in appearance, with its distinctive reddish coat and white markings.

Sadly, there are only about 500 Ethiopian wolves in the world, all living in isolated locations across the Ethiopian highlands. Threatened by loss of habitat and the spread of lethal diseases carried by domestic dogs, their last stronghold is in the Bale Mountains National Park, Ethiopia, where over half of these wolves are found. At 3,500m above sea level, the temperatures range from freezing -15°C nights to hot 25°C days.

The Web Valley, with its river and rich flat grassland, provides the optimal habitat for the Ethiopian Wolf Family, with plenty of prey species, such as grass rats and giant molerats. It also offers numerous places to den and last year’s breeding season successfully produced 25 pups to seven monitored packs.

Eric Bedin, Field Director of EWCP, says: “Thankfully their survival rate was high. Currently around 70 adult and sub-adult (aged two-three years) wolves are found in the valley. It is fantastic to see that the Web Valley wolf population has nearly bounced back to its level three years ago.”

Each pack is led by an alpha male and female and follows an intricate social structure. The alpha female gives birth to pups in a den underground and every member of the pack helps take care of them. However, when hunting, they mainly hunt alone for small mammals.

EWCP monitors and protects a number of packs in the park, and whenever there is a report of a rabies outbreak, they need to act fast to prevent this infectious disease spreading among the wolves and their pups. Regular pre-emptive vaccination programmes are vital to help prevent diseases occurring. Domestic dogs in the local communities are vaccinated, and to avoid human contact with the wolves, the vaccination is hidden in pieces of meat-bait. By vaccinating and reducing the number of outbreaks, this not only benefits the wolves, but also the dog owners and their livestock, for whom rabies is also fatal.

Bedin says: “Rabies vaccinations have prevented this population suffering from a disease outbreak, despite it being detected in a few domestic dogs. This is a great achievement which EWCP is proud of. Our staff continues to give preventative vaccination to wolf families in other parts of the Bale range.”

“As the number of wolves increases and competition for territory gets more acute, wolves have been observed exploring further down the valley,” adds Bedin. "The return of wolves to land, unoccupied by wolves for eight years, is great news."

EWCP headquarters are based in the Web Valley and here they monitor the wolves and work closely with local communities to help ensure the wolves’ future. A good relationship is vital if they are to co-exist and every year EWCP hold a special ‘Wolf Day’ where local people come together to play games, enjoy songs and dancing, and learn why the wolves are so precious.

ADOPT THE ETHIOPIAN WOLF FAMILY     SAVE A LIFE 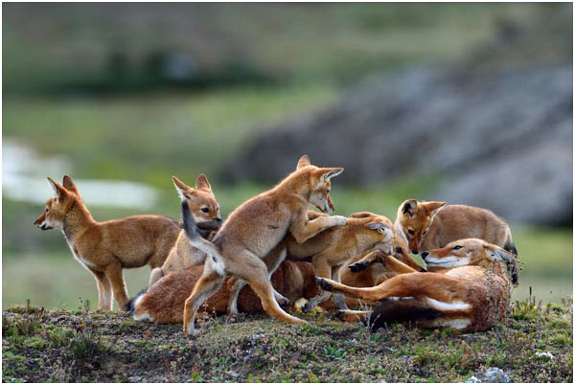