Rescued from the barren confines of a travelling circus in Sardinia in 2014, Elsa now relaxes and enjoys the beautiful views of the Tuscan landscape 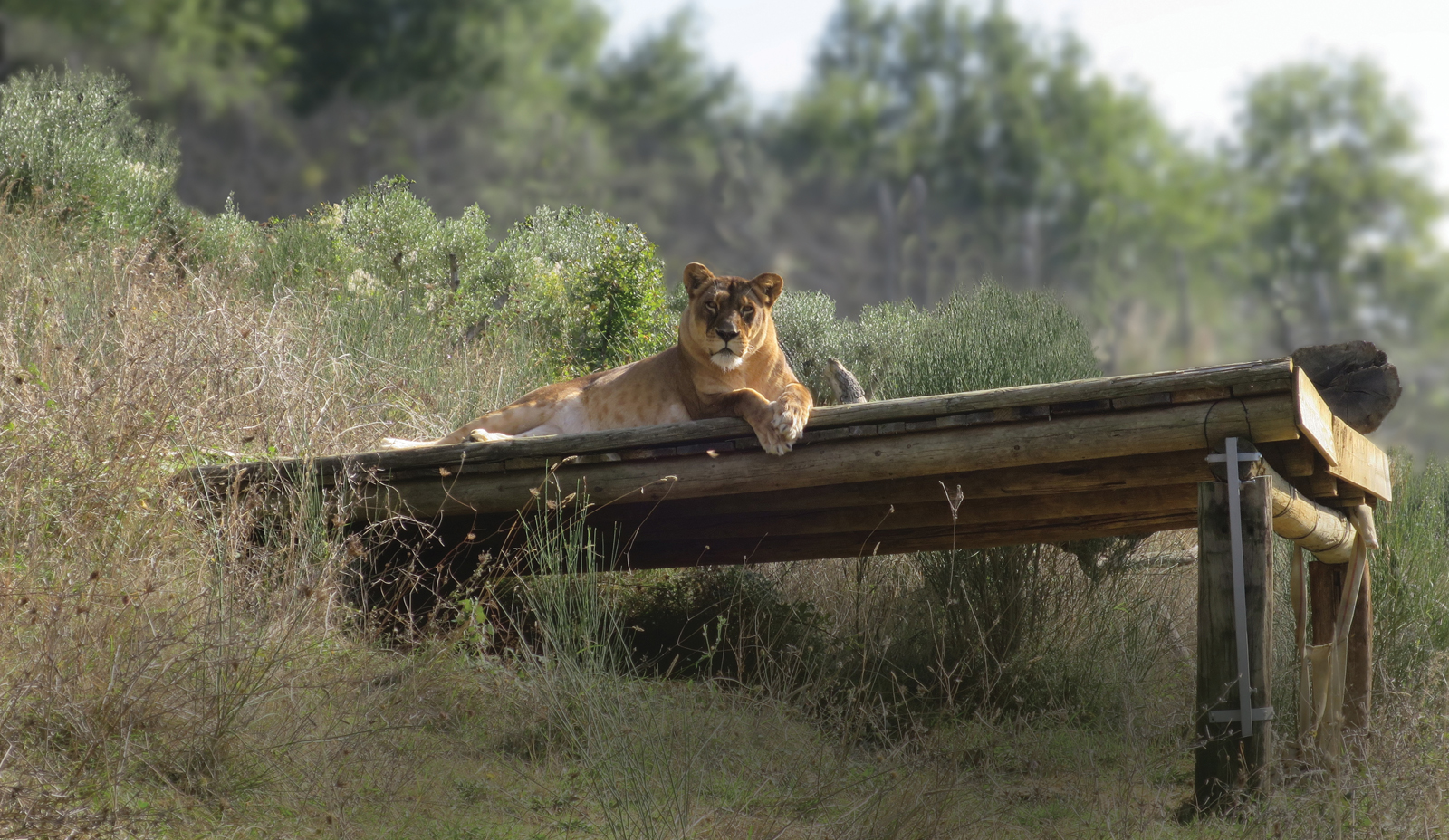 Elsa is an ex-circus lioness. She was forced to perform tricks for entertainment and her living conditions were cramped and squalid. She was kept in a small, barren cage, essentially just a circle of iron bars within a concrete car park, and her night quarters were inside a rusty beastwagon where she slept on a metal floor.

In 2014, the circus owners were taken to court for animal cruelty, and a long and complicated court case ensued.

Born Free worked with Italian organisation Lega Anti Vivisezione (LAV) to remove Elsa from the travelling circus, which was in Sardinia at the time, and rehome her, until the court case was concluded. As a temporary measure, Elsa was taken to a wildlife sanctuary in northern Italy, with Born Free covering the cost of her transportation from Sardinia, her daily care and veterinary costs, thanks to public support.

Born Free constructed a new night room within an existing large enclosure which gave Elsa permanent outdoor space nestled in the open countryside. She now has plenty of room to explore.

In 2018, due to a legal technicality, Elsa was permitted to be removed from the court case, and therefore permanently placed before the conclusion of the investigation and without risk of being returned to the circus. As Elsa is so settled where she is, it was decided that she should remain at the sanctuary and Born Free would continue to fund her lifetime care.

Elsa is a relaxed, playful and confident lioness. She is certainly young at heart and often plays as if she is still a cub. Whilst Elsa is active and enjoys rolling around in the grass, she will also doze in the sunshine, often up on her platform where she can get a good view of her surroundings and keep an eye on what’s going on around her.

To enrich her daily routine Elsa is given items to play with, such as a ball stuck in a tyre, a sack filled with straw, or a pumpkin filled with poo! Such items help to stimulate her senses and encourage her to exercise. Food hidden inside an object is another stimulant, and Elsa has to use her teeth and claws to access her reward.

In 2019, Elsa was successfully introduced to a male lion called Madiba for companionship. They share a large outdoor enclosure situated on the naturally rolling terrain. The pair are getting along well and seem to be enjoying having companionship.

Dr Chris Draper, Born Free’s Head of Animal & Captivity says: “I oversaw the introduction of Elsa to Madiba. They had been living next to each other for a considerable period, years in fact, while Madiba was part of a different court case, and were sharing some areas of their enclosure in turn. They spent a lot of time resting next to each other through the fence, and showed no negative interactions. Their introduction was very smooth, with no aggression, and a clear sense that Elsa was very interested in him, while he was slightly underwhelmed by having to live with a new companion. Since then, life with Elsa has brought out a new confidence in Madiba.”

Elsa seems sensitive to Madiba’s less outgoing nature and has encouraged him to explore more of the outdoor enclosure, something he was afraid of doing previously.

Elsa is settled and content, and living the life she deserves. Under the Tuscan sun, she is happy and continues to live in a safe environment away from the circus. Please help us to support Elsa by donating below.