ELEPHANTS AND PEOPLE: CO-EXISTENCE IS POSSIBLE

Nkirote Kathurima (not her real name) has interacted with elephants all her life. She was born and bred at the edge of the Lower Imenti Forest which forms part of the Mount Kenya Forest Reserve.

From her earliest memories, elephants would raid their farm and eat and destroy their crops. “Elephants love pumpkins and other vegetables which do very well in this region. Besides losing our food and livelihoods, I have seen a few people who have been attacked by elephants. It’s never a pretty sight,” Nkirote wrote in an essay competition recently run by the Kenya Wildlife Service (KWS) in partnership with Born Free as part of the celebrations for World Elephant Day.

Although the world gives special attention to these terrestrial giants on 12th August, in Kenya we are celebrating World Elephant Day today (11th) in Meru County. The theme, ‘Elephants and people, co-existence is possible’ captures the reality in Kenya and many other elephant range states. The focus is on the plight of elephant populations that are under huge pressure due to habitat encroachment and loss, conflict with humans and ivory poaching.

According to KWS, there are 33,948 elephants in Kenya ranging in an area of 139,344km2.   Communities bordering parks and reserves such as Nkirote’s suffer immensely from the effects of elephants raiding their crops. It is therefore crucial to mitigate this conflict. 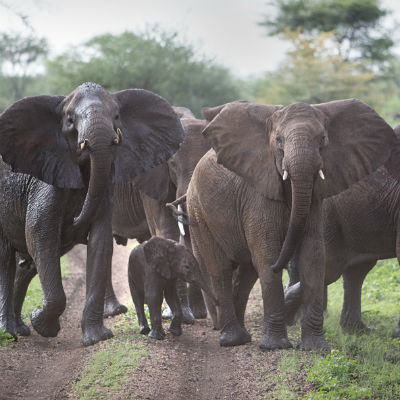 Elephants and people have a lot in common. They are sentient beings, mirroring humans in many ways. They live in close-knit families, greet each other, celebrate births, play with their young, and mourn their dead. They have different personalities too. You will find gentle and kind souls, clowns, aggressive and belligerent characters, and slow and sharp ones.

Elephants are ecosystem engineers and architects. By their sheer size, they create and maintain habitats by physically transforming them. They open up thick bushland for smaller mammals to live in. Their dung helps in the germination of various plants including acacia trees and some species depend entirely on elephants for their dispersal. Studies have shown that more amphibians and insect species tend to thrive in habitats with elephants as opposed to those with none.  Our lives are closely inter-linked.

Some 85kms away from where the Kenya national celebrations are being held is Meru National Park, where Born Free has supported the KWS team in their anti-poaching efforts by providing much-needed fuel and equipment for rangers. We also remove snares placed for indiscriminate poaching at the Park’s western boundary.

Last November, we provided aircraft fuel and technical support for an aerial census of elephants in Greater Northern Kenya, which included Meru. In Amboseli, Born Free continues to support the Amboseli Elephant Research Project – the longest-running study of wild elephants in the world. And we continue to conduct outreach and awareness missions to schools and the local communities at both project sites.

Co-existence is possible. “Elephants have caused us sleepless nights and lots of stress, but elephants are just like us human beings,” adds Nkirote. “Over the years, I have learnt that they don’t attack you if you don’t attack them. I also count myself very lucky as I see them almost daily while other people pay top dollar just to come here and see them in the wild, sometimes only once in their lives.”