Meru National Park, 350kms north east of Nairobi, is a unique and diverse wildlife habitat. It is rich in animal species with most dwelling around the western borderline. This area generally receives plenty of rainfall – keeping vegetation cover green and attracting wild animals. However, indiscriminate poaching is generally higher in this area. Poachers rely mostly on wire snares and, on rare occasion, bows and arrows.

To curb poaching, Born Free, with the support of Kenya Wildlife Service, focuses on this boundary, Kiolu area, to remove wire snares set by poachers. Poachers cut fence lines to create these wire snares. This creates another challenge – by cutting fence lines, they open up access for wildlife into community farms that, in turn, increases conflict. Snares are usually set in strategic positions along animal tracks and near water points. In some instances, pits are dug along paths and covered with dry grass. All animals are at risk. Sometimes wires snare larger animals, which naturally pull and tug trying to free themselves, leading to the wire digging deep into their flesh.

Placement of snares is mostly done during the dry season and at the onset of rains. During this time, we enhance our operations by pitching mobile tents in target areas. The exercise is tough and cumbersome. Finding snares is difficult due to thick bush and tall grass. They are also well hidden to snare different animals by the leg, neck or trunk.

Desnaring is also precarious. On average, we dedicate three to four hours to foot patrol, covering about 2km2 per operation, combing through the bush, shrub and open grassland. We have endured nasty experiences such as attacks by bees and wasps, and have come across dangerous snakes like the puff adder and python.

In June, we conducted a number of patrols and found indications of human activities. An abandoned temporary hut with a cooking pot, plates and a sack were found and destroyed. There was also a fire base and an unidentifiable animal skin hung on a tree. The site was inactive, indicating the poachers had left the area at the onset of the heavy rains season in March. From these patrols, we retrieved 29 deadly snares for medium-sized wildlife. Some of the snares were set on clumps, others looped around trees and others following a straight pattern.

In the last three years, we have recovered about 1,800 snares, apprehended four poachers and rescued a number of wildlife, including a lion.

OUR WORK IN MERU 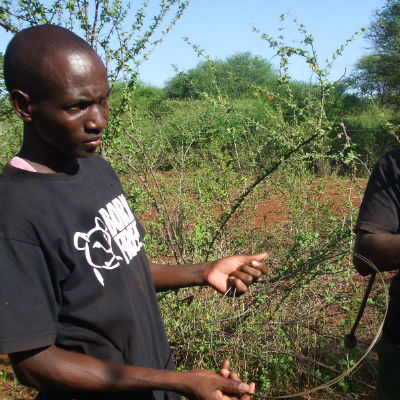