A new book that lifts the lid on South Africa’s gruesome lion farming and canned hunting industries has launched today, with Born Free benefitting from the proceeds.

Cuddle Me Kill Me, by Richard Peirce [£11.99], tells the true stories of two male lions, Obi and Oliver, rescued from breeding farms, and uncovers horrifying facts about the captive lion breeding industry in South Africa.

Virginia McKenna OBE, Born Free’s Co-Founder & Trustee, said: “This is a brave exposé, written by a courageous man. Even I, who has read many stories about the increasing and fearful exploitation of wild and beautiful creatures, was shocked by what Richard Peirce and his wife Jacqueline have uncovered. I hope even the hardest of hearts will be moved to speak out against the issues revealed here, and pledge not to cuddle, nor to kill.”

Will Travers OBE, Born Free’s President & Co-Founder, who wrote the blurb for Cuddle Me Kill Me, added: “No one with a beating heart can read Cuddle Me Kill Me and not want to help end a form of wild animal exploitation that brings shame on us all. Some still try to make excuses for canned hunting, cub petting and walking with lions. Some claim they are ignorant of the dreadful fate that will befall thousands of lions and other predators every year. Their excuses are no longer valid. This book has told the truth.”

Born Free is absolutely opposed to the cruel practice of canned hunting, and campaigns to end the captive breeding of lions and other predators for canned hunting and other forms of commercial exploitation. More than 8,000 captive-bred lions and other predators languish in 260 or more breeding facilities, where they are exploited for profit at every stage of their lives. Unwitting paying volunteers are recruited to help hand raise captive-bred lion cubs, on the false premise that they will be released into the wild as part of a lion conservation initiative. Tourists pay to take selfies while petting cute cubs or walking with lions. Ultimately, many of the animals will be transferred to canned hunting facilities to be shot by paying ‘hunters’, and their bones and other body parts will be sold into local and international trade.

Last month, South Africa’s Department of Environmental Affairs almost doubled its controversial annual export quota for skeletons from captive-bred lions from 800 in 2017 to 1,500 in 2018 – a move widely condemned by Born Free and other NGOs.

BUY CUDDLE ME KILL ME     LION FARMING AND CANNED HUNTING 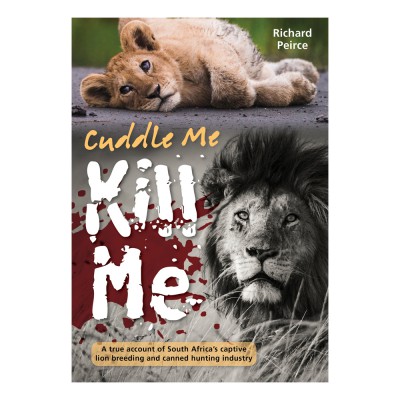