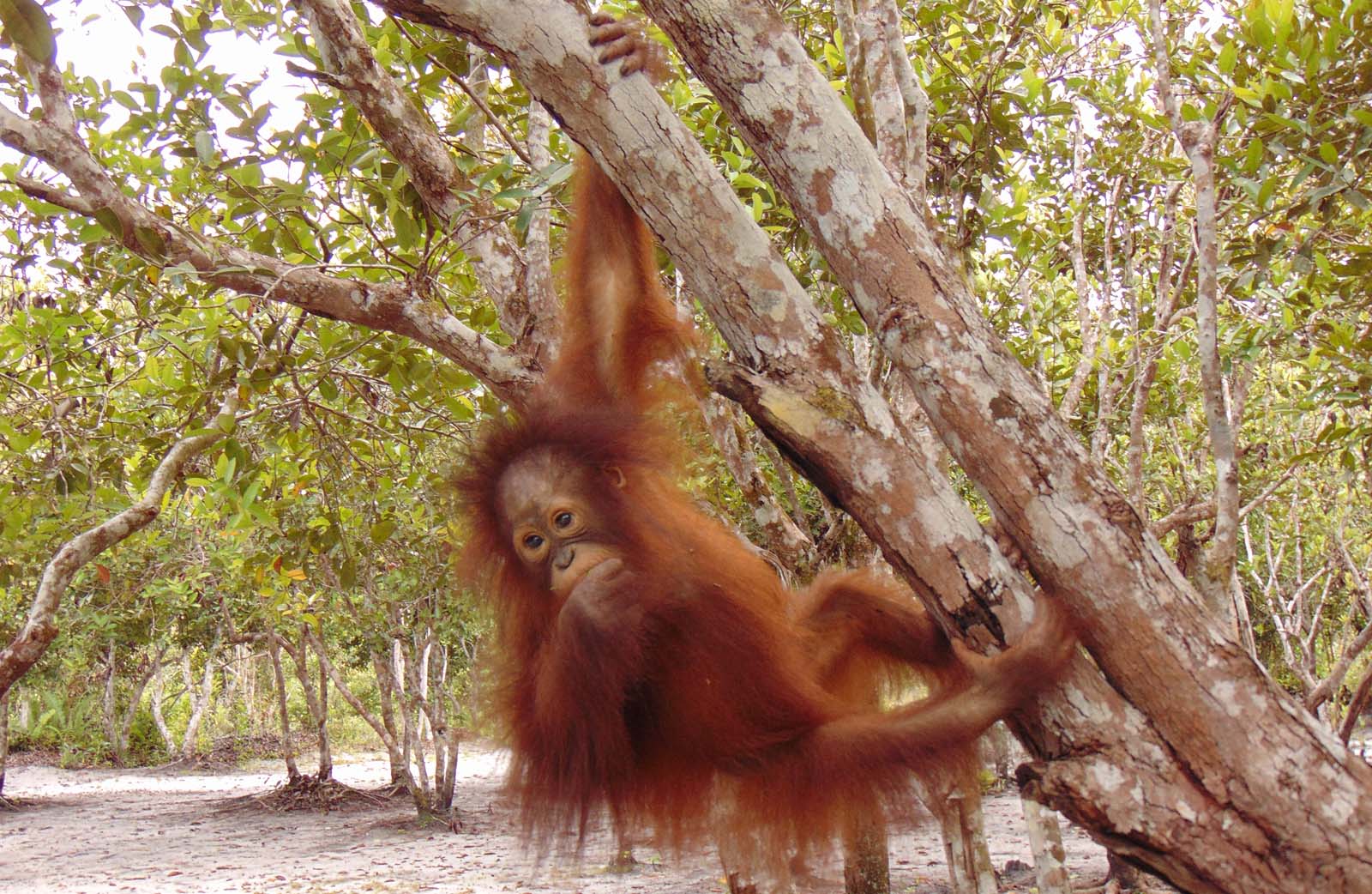 Local Indonesian myth says orangutans can talk, but, out of fear they would be enslaved, they remain silent. Others believe humans turn into orangutans when they die. One legend says orangutans were once human, but were sent to live in the forests and covered with red hair as punishment for bad behaviour. While lore may surround the orangutan, their threats are intensely real. Due to hunting and habitat loss, caused by activities like mining, logging, forest fires and palm oil development, an estimated 80% of orangutan habitat has been lost in the past three decades and their range is now restricted to pockets of forest in Borneo and Sumatra.

Born Free supports the Orangutan Foundation, an organisation that has been working hard for over two decades to protect critical orangutan habitat in Central Kalimantan, Indonesian Borneo. The Lamandau Wildlife Reserve was established in 1998 from the remaining forest of three former logging concessions for the purpose of becoming an orangutan release site. It covers some 160,000 acres (± 64,300 ha) of mainly tropical peat swamp forests in western Central Kalimantan and acts as an important carbon storage reservoir, containing more than 36.5 million tons of carbon. The Orangutan Foundation, through its orangutan rescue and reintroduction programme, has helped to establish a population of more than 550 orangutans here.

At Camp JL, a post-release monitoring site, five infant orphaned orangutans – Mona, Nyunyu, Boy, Adib and Born Free’s adoptee, Timtom – who were confiscated after being kept as pets by villagers, have been making progress in developing their basic survival skills. In the wild, infant orangutans are nursed by their mothers for four to five years and may stay with their mothers for another seven to eight years thereafter, learning everything they need from them. Skills, such as nest building and predator avoidance, are crucial for their independence and survival. At camp JL, the young orangutans learn from each other and have plenty of freedom in their environment, before becoming independent, but it takes years for the young orangutans to learn everything they need to know. However, those that complete all their lessons have been extremely successful; more than 80 orangutan infants have been born from mothers released back to the wild in the Lamandau Reserve.

Protecting the released orangutans is vital to their future. The foundation has built eight strategically located guard posts on the borders and river entrances to the reserve. The guards at the Born Free-supported post in Lamandau, who are local community members, have successfully protected the forest habitat. They conduct foot patrols in the forest and use boats along the main river in Lamandau to monitor illegal activities. Although two instances of small-scale illegal logging were recorded, the guards disrupted the operations, preventing vital orangutan habitat from being destroyed. Regular patrolling is the most effective way to detecting illegal activities.

Without the vital work of the Orangutan Foundation, the future of orangutans would be much bleaker.