Tigers deemed as dangerous are captured by the authorities, but Living with Tigers is working to reduce human-wildlife conflict in central India

In November 2018, a six-year-old tigress, known as Avni, or T-1, was shot dead in Maharashtra, central India. Avni and her two cubs had reportedly killed 13 people since 2016 and were hunted for two years after officials ordered her death.

Avni was a so-called conflict tiger – a tiger thought to have killed people and therefore deemed dangerous. In India, conflict tigers are captured to stop them from killing again.
Unfortunately, Avni is not the only conflict tiger in India. According to the Indian government’s environment ministry, tigers were responsible for 92 human deaths between April 2014 and May 2015.

However, tigers are also targeted even if they haven’t killed humans. For example, in 2010, a tigress was blamed for the death of 43 cattle over a two-week period in one village in central India. In retaliation, some members of the local community decided to poison the tiger, who was later found dead. 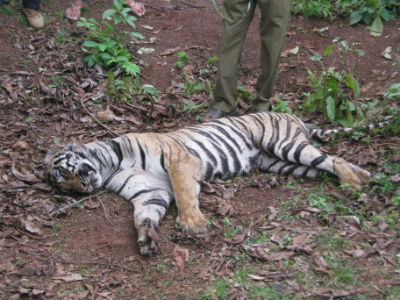 “Tigers and people live close to each other in central India; this brings about conflict and the need for compromise,” explains Professor Claudio Sillero, Born Free’s Chief Scientist. “Fostering co-existence with large cats requires long-term engagement between government officers, conservationists and local people to minimise impact on human lives and livelihoods.”

That’s why Born Free’s Living with Tigers programme works across central India on compassionate initiatives so that tigers and humans can live alongside each other peacefully. According to Tiger Research and Conservation Trust, part of Born Free’s Living with Tigers programme, about 85% of all conflict occurs when people venture into the forest – entering the territory of wildlife. Living with Tigers initiatives therefore focus on reducing the need for local communities to enter the forest by, for example, providing bio-gas fuel sources, building toilets or creating jobs through sustainable bamboo workshops.

Born Free also funds the lifetime care of a conflict tiger at its tiger sanctuary in Bannerghatta National Park, southern India. Gopal was captured by authorities after coming into conflict with people when he was found preying on their cattle. Sadly, Gopal can’t be released back into the wild, but now lives in a natural forest habitat for rescued tigers in a section of the park closed to visitors.

Through Living with Tigers, with your help we can safeguard wild tiger populations and educate more people on the importance of conservation and approaches to co-existence.

LIVING WITH TIGERS     ADOPT A TIGER