Once again, tragedy has struck in a circus using wild animals: It has been reported that an animal trainer has been mauled to death by four tigers at Circus Orfei in Southern Italy on 4th July. News reports indicate the animals played with the trainer’s body for half an hour before they could be driven away by circus workers.

Dr. Chris Draper, Born Free’s Head of Animal Welfare & Captivity said: “Until we see common sense rule and bans brought in, we can only expect unfortunate incidents such as this to happen again, and all the while wild animals will continue to suffer in circuses. Across Europe, significant numbers of wild animals are still transported, trained and exhibited for dubious entertainment, particularly in Italy, France, Germany and Spain. This is an increasingly unpopular form of animal exploitation that has had it its day, and Born Free is at the forefront of efforts to bring it to an end wherever we have influence.”

Additional legislation is required in Italy in order for a ban on wild animals in circuses to take effect – something for which Born Free and colleagues in Italy have been working to bring about for several years.

Born Free is striving to bring an end to the use of wild animals in circuses in the UK and across the globe. Born Free is delighted to report that legislation currently passing through the Westminster Parliament will ban wild animals from travelling circuses in England, while it is expected that a similar ban will soon be brought in for Wales. 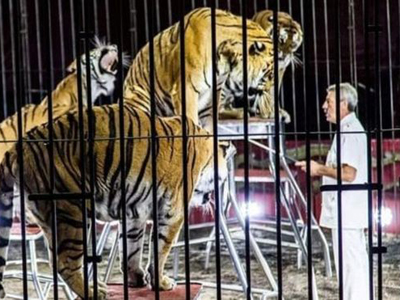