The Cheetah Family are a coalition of rescued cheetah who live at Ensessa Kotteh, Born Free’s wildlife sanctuary in Ethiopia.

Most members of The Cheetah Family were victims of the wildlife trade – stolen from the wild as cubs to be sold as pets. Happily, at our centre, they have a chance at life living in spacious camps. These natural habitat homes are filled with trees, ponds and undergrowth to explore.

Sisters Tamu and Nura have cheeky characters and like to test their stalking skills on falling leaves, twigs and mud mounds. Brothers Namazzi and Dembe have a close bond. They are never far from each other.

The two like to lie together and doze in the sunshine – intermittently opening their eyes to keep a look out at their surroundings.

Maggie Balaskas, Born Free’s Animal Rescue and Care Manager, says: “The cheetah at Ensessa Kotteh have strong group bonds. They are often seen curled up together resting in the shade under the trees looking perfectly contented.” 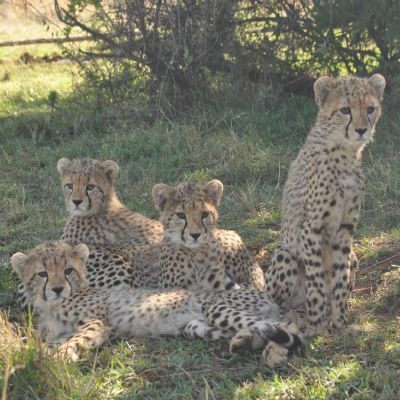 Ensessa Kotteh only houses wild animals in need – those injured, orphaned or confiscated from illegal trade or ownership. Each animal that enters Ensessa Kotteh – from birds to primates to big cats – is carefully assessed to see whether full rehabilitation and release back to the wild is feasible. Those who cannot be released, such as The Cheetah Family, are provided with lifetime care. The centre also offers education programmes to teach students about nature, wildlife and human-wildlife co-existence.

Cheetahs are the fastest land animal, they can accelerate at the rate of a sports car and reach speeds  of up to 75mph – covering eight metres in one stride! A cheetah’s spine is particularly flexible, and an enlarged heart, wide nostrils and increased lung capacity allow for better oxygen intake.

It is estimated that only 7,100 cheetahs remain in the wild. In Africa, cheetah now inhabit only 10% of their historic range, while their distribution in Asia is limited to the central deserts of Iran. The threats to cheetah are many and include wildlife trade, persecution by people for preying on livestock, trophy hunting, poaching for their skins, habitat depletion and prey reduction.

The illegal wildlife trade is a global issue, affecting millions of animals big and small. Cheetah cubs are currently in high demand as pets in the Middle East – causing extreme suffering to the individual cheetah involved and contributing to their decline in the wild.

Help Born Free continue to look after The Cheetah Family by adopting them today.