The tragic life of cubs born in lion breeding farms for the canned hunting and lion bone industries.

Canned hunting is the killing of captive-bred animals in a confined area from which they cannot escape. In South Africa, it is not only legal, it is flourishing. 8,000 or more captive-bred lions and other predators languish in around 250 breeding facilities, where they are exploited for profit at every stage of their lives. It’s a tragic life for the animals concerned.

Dr Mark Jones, Born Free’s Head of Policy says: “The animals involved in canned hunting are habituated to people from an early age, often through being hand-reared and bottle-fed, so they are no longer naturally fearful of people, making them easy targets for a rifle or bow when it comes to the hunt.”

Cubs are taken from their mothers when they are just a few days old so the females can be bred again quickly and produce the next litter. 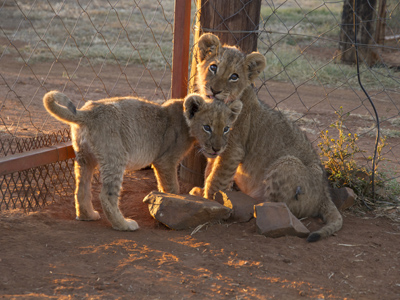 Many lion cubs are hand-reared by paying volunteers, under the false impression they are returning orphaned cubs to the wild and therefore helping lion conservation efforts. Unfortunately, most volunteers are misinformed and completely unaware of the true fate of the cubs and the consequences of handling them.

The majority of tourists are completely unaware they are funding the canned hunting industry by paying to pet, cuddle and have their photo taken with lion cubs. The popularity of this activity, particularly with young families, together with the many venues available, makes this a hugely profitable sideline.

Once the cubs are too big and heavy to pet, they are used for another popular and profitable tourist activity, walking with lions. The lions walk with small groups of paying visitors, maybe four times a day when busy, and will be familiar with the routine and know where to stop for photo opportunities.

On reaching maturity, captive-bred lions can be cycled back into the breeding programme, or sold to canned hunting operations to be shot by paying hunters.

Hunters can choose the animal they want to shoot online and buy a tailor-made package to suit their budget. The animal will be captive-bred, used to humans, not have learned any hunting skills and be placed in the hunting location as little as a few days before the hunter arrives.

Jones explains: “Many captive-bred lions end up being released into fenced enclosures, to be shot by hunters who want to bag a trophy at a knock-down price while avoiding the time and effort required for a wild hunt. Canned hunting even divides hunting enthusiasts, with many pro-hunting organisations condemning the practice.”

Due to increasing demand in China and south east Asia, lion products are being used to substitute the shortage of tiger products, and to supply an emerging demand for lion bones. South Africa is the world’s largest legal exporter of lion bones and skeletons.

Between 2008 and 2015, South Africa issued permits for the export of more than 5,363 lion skeletons, nearly 98% of which went to Laos and Vietnam, countries considered by global conservation and law enforcement agencies as key conduits for massive illegal international trade in wildlife.

In July 2018, the South African government almost doubled its annual export quota for skeletons from captive-bred lions from 800 in 2017 to 1,500 in 2018, but reduced the quota back down to 800 following an international outcry.

International criticism has called for an end to these barbaric practices on the grounds they have no conservation value and are conducted purely for profit. However, the South African government continues to back this industry, allowing it to grow and remain profitable.