The Hoima corridor links major chimpanzee populations in two large protected areas, Budongo and Bugoma forests – each home to more than 500 chimpanzees but separated by 50km, making Hoima critical in the fight to save the chimpanzee in the country and to preserve genetic diversity.

Chimpanzees at Bulindi have been monitored continuously since 2014. Monitoring is essential for understanding threats to their health and survival, and increases their safety as communities are less likely to trap or kill animals they know are being monitored. Four men from local communities have been trained to work as full time ‘Chimpanzee Monitors’ and as field assistants for biodiversity surveys. As their work involves daily contact with local communities, they also act as ambassadors both for BCCP and for the chimpanzees, sharing important conservation messages and promoting co-existence between people and chimpanzees. 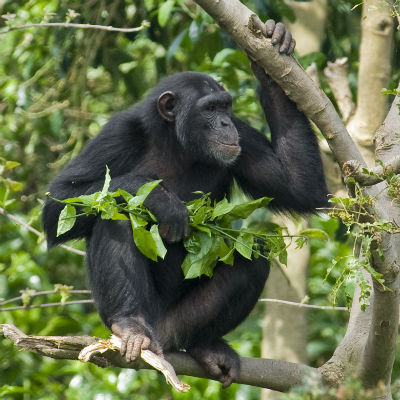 Among numerous other threats, deforestation across their range is edging chimpanzees closer towards extinction. Their habitat is cleared for agriculture, roads, mines and new settlements. In the Hoima district, deforestation caused the loss of more than 80% of forest in the chimpanzees’ range between 2006 and 2014.

The chimpanzees in the Hoima district are threatened by widespread logging and habitat conversion to farmland as families seek livelihoods through timber extraction and farming. However, BCCP is tackling deforestation head on. It operates tree nurseries to supply communities in the Hoima corridor with seedlings for planting, including indigenous fruit and timber species, restoring areas that were once deforested. This includes providing households with eucalyptus seedlings for woodlots where they can sustainably harvest timber. A total of 175,400 seedlings were distributed to more than 600 farmers in 61 villages over five months this year. At the pilot project site in Bulindi, deforestation has halted, natural forest is regenerating and due to community outreach projects, tolerance to chimpanzees is evidently improving.

To ensure sustainable livelihoods for people living in the Hoima corridor, BCCP has begun an exciting scheme: coffee farming. BCCP has given 152,000 coffee plants to farmers to cultivate as a cash crop in the Hoima corridor. However, there is one very important condition – no forest can be cut down to plant the coffee, and it is instead ‘shade grown’.

Coffee grows naturally in tropical climate zones and thrives under shaded canopies, but in the 1970s, demand for coffee increased and farmers were encouraged to cultivate sun-grown coffee, which has been tailored to produce nearly three times as much coffee as the shade version. However, to produce sun-grown coffee, vast tracts of forest are cleared. For each cup of coffee consumed, it has been estimated that one square inch of rainforest was destroyed.

Shade-grown coffee has a number of benefits. Likely to be one of the most important issues for the consumer, some argue that shade-grown coffee produces a better flavour for the final product. For conservationists, there are benefits at every ecosystem level. By preserving or replanting forest for shade-grown coffee, farmers are providing habitat for insects, birds and mammals, whilst also connecting fragmented tracts of forest. Bird populations, for example, increase with tree diversity and act as natural predators for coffee pests, improving yield. Increased tree density prevents soil erosion and acts as a carbon sink.

Whilst chimpanzees habitually eat sugarcane (the main local cash crop), jackfruit, banana, mango and cocoa, coffee plants are not on the menu for these great apes. This means that farmers and chimpanzees can peacefully co-exist. Shade-grown coffee is not unique to Uganda either. Many other plantations have employed this technique in countries such as Rwanda, Ethiopia, Costa Rica and Mexico.

It is projects such as Bulindi’s shade-grown coffee and chimpanzee monitors that will promote co-existence between wildlife and people. We both have an equal right to live on this shared planet and empowering communities with sustainable development tools is key to conservation.