There are as many as 250-300 lion breeding parks in South Africa, around a third of which offer cub interactions to the public. Every year, well-meaning volunteers pay to help hand-rear captive-bred lion cubs, and tourists pay to walk with lions, under the false impression that they will eventually be released into the wild.

However, the reality for these animals could not be further from the truth, as wildlife campaigner Beth Jennings found out when she visited South Africa in 2015.

I’ve loved animals for as long as I can remember. I worked in dog welfare – both in the UK and internationally – until 2015, when I decided to take a break to volunteer with lions. I was obsessed with The Lion King throughout my childhood and it seemed the obvious choice!

How did you get involved with exposing the canned hunting industry?

I found a trip called ‘Live with Lion Cubs in South Africa’ on a gap year website and was taken in by the promise of raising orphaned cubs for release into the wild. The company was owned by an international travel agency but I checked that the park wasn’t involved in anything untoward and trusted the information I was given.

I spent two weeks raising lion cubs – bottle feeding, bathing and hosting tourist groups – it seemed like I was living the dream. A few days into my trip I started to notice red flags relating to the care of the animals. I dug deeper online and I found out the truth – the park was one of hundreds in South Africa operating under the guise of conservation.

What are young people told about cub petting facilities vs the truth?

The truth about lion welfare in South Africa is so far removed from what I had imagined that it took me months to come to terms with what I had been involved with.

It is estimated there are between 8,000 and 10,000 big cats in captivity in the country which will never be released into the wild. Instead, they will likely meet one of two fates.

The first is canned hunting. A canned hunt is a trophy hunt within a fenced enclosure, so the lion cannot escape. A hunter can go into the enclosure and ‘take’ his lion the same day; in comparison to a traditional trophy hunt where a hunter can spend 21 days without a guaranteed kill. Lions destined to become trophies need to be healthy with big, dark manes. This means that canned lions are usually well cared for – often by unwitting volunteers.

The second eventual fate is the lion bone trade. Unfortunately, as only the skeleton is needed, the standard of care for these lions is much, much lower. They can be left to starve and no one would know.

How are you using your experiences to change public perception and prompt change?

Being unintentionally involved in wildlife exploitation absolutely broke my heart. I knew that I couldn’t just come home and do nothing. I needed to speak up.

I started a blog, Claws Out. My aim was to raise awareness to prevent other volunteers repeating my mistake. The blog snowballed and I was invited to events, interviews and even a panel in the European Parliament to share my experiences.

Recently, I have been fortunate to work in partnership with Born Free and Olsen Animal Trust to create the Claws Out campaign. 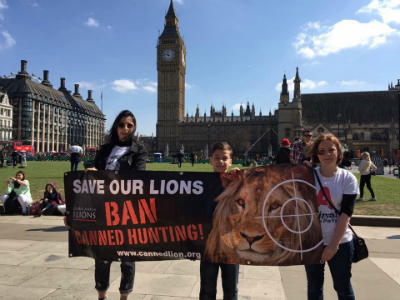 Beth's experience has led to a major campaign 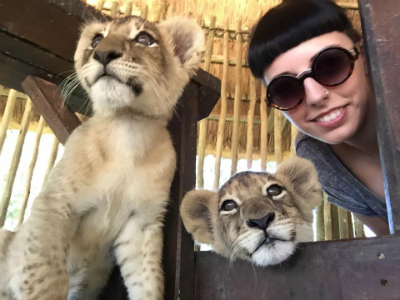 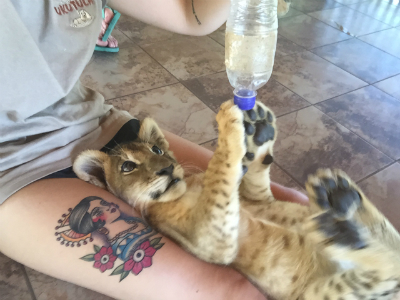 Volunteers are urged not to interact with wild animals

What has the reaction been like to your campaign?

Claws Out has been incredibly well-received. I’ve had support from amazing animal welfare organisations and still receive emails about how my story has stopped someone from visiting a lion facility.

Do you think attitudes are changing?

Slowly but surely I think people are becoming more aware of the implications of cub petting. As social media evolves, so does the number of people seeing and sharing our message. We’re working to put lion cub petting in the same box as swimming with captive dolphins, stroking tigers in Thailand, and riding elephants.

What are your tips for young people looking to volunteer in conservation?

My advice is simple – stay away from anywhere that offers physical interactions with wild animals. Ask yourself why you would be allowed to touch animals that should be in the wild. A true conservation effort will never let you handle animals.

I also urge people to spread the message. People I speak to are often surprised that lion cub petting has links to the canned hunting and lion bone trade, so make sure you tell everyone you know. There are no exceptions. There’s no such thing as a good petting park, no matter what they try to tell you!

Lastly; stay positive. It’s easy to feel downtrodden and that no change is being seen, but we have to commit to the long haul. We can make a difference, we have to.