Stretching across the Kenya-Tanzania border, the vast, semi-arid ecosystem of Amboseli is one of the richest wildlife areas in all of Africa and one of the last strongholds for lions. Lions have declined precipitously across their range; in Kenya alone, their numbers have plummeted from 10,000 in the 1980s to only about 2,000 today. Amboseli is a hotspot for human-lion conflict, and this is one of the main threats to the big cats’ survival.

Approximately 27,000 Maasai live in Amboseli, surviving on their herds of cattle, sheep and goats as they have for hundreds of years. Livestock is a strong part of Maasai culture and their principal source of livelihood – 75% of the community derives their income from it, and each cow can fetch about 30,000-40,000 Kenyan Shillings (£230-305). 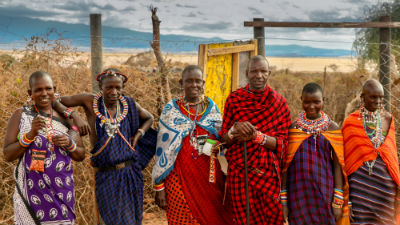 Livestock predation by lions is a serious problem, and a single loss of an animal can derive the Maasai of their livelihood and result in strong emotions and tension. Some community members retaliate by poisoning and spearing lions. For example, an average 18 lions a year were killed in Amboseli between 2001 and 2006 in retaliation for livestock predation. This was in an area estimated to have had fewer than 100 lions at the time.

WHAT IS A BOMA?

The Maasai community traditionally keep their livestock at night in enclosures made of Acacia branch fencing. These fences are no more than 1.5 metres high, and the branches are unevenly distributed and may leave gaps. These traditional bomas also lack strong doors, instead using a thorn twig that a predator could easily push through.

Our PPBs strengthen the traditional boma. They consist of two-metre high chain link fences surrounded by dry thorn scrubs, and they have metal doors. The entire PPB is also constructed with recycled materials: doors are made from old metal drums, door hinges are cut from old car tyres or old Maasai sandals, and posts are made from recycled plastic. 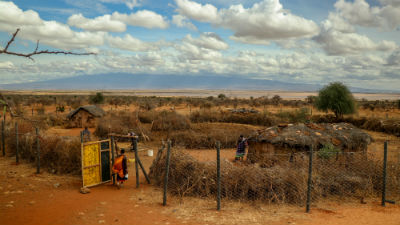 This simple and cost-effective solution has led to a significant reduction in lion retaliatory killings in Amboseli. The 18 lions killed per year in 2001-2006 has since dropped to just four per year. No lions or livestock have been killed at our PPBs since their inception in 2010.

In 2015, we added three new innovative components to our PPBs for greater benefit to the community. Solar lighting units, energy saving stoves, and water harvesting structures were added, and thus the ‘smart boma’ was born.

The solar lighting units allow school children to complete their homework in the evenings, while reducing indoor pollution caused by kerosene lamps. The 2,225 new energy saving stoves improve health by reducing indoor smoke pollution, and they reduce the rate of habitat destruction caused by firewood collection. The water harvesting structures provide clean drinking water to community members and their livestock and are particularly advantageous during the dry season. 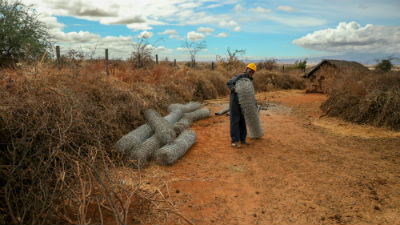 Thanks to our PPBs, livestock owners can now spend their nights with their families and their days engaging in social and economic activities, as they no longer have the physically and mentally exhausting task of spending all night guarding their animals in traditional bomas.

Pride of Amboseli uses a cost-share approach, where the community contributes 25% of the cost of the PPB and any subsequent repairs. In this way, Born Free Kenya can use its limited funds to help as many people as possible. A total of 275 PPBs are now dotted around the Amboseli landscape, protecting an estimated 83,000 livestock belonging to 5,800 people.

Encouragingly, the PPBs are beginning to change people’s perceptions positively towards the conservation of lions. Thanks to the work of Born Free and other partners in the Amboseli ecosystem, lions are beginning to make a comeback. Only 50 were estimated in Amboseli in 2009, and this has since jumped to 200.

This is a conservation success story, one that shows human-wildlife conflict can be managed with a simple approach that does not disturb wildlife or interfere with a person’s way of life. It is co-existence: truly a win-win for all.