Moon bears have shaggy black fur with a distinctive yellow crescent across the chest and large elongated ears. Highly intelligent, they have a extensive vocabulary of sounds.

They are excellent climbers, aided by their short strong claws, and swim very well. Although they usually walk on all fours, they will stand on their hind legs to reach food or fight.

Moon bears are crepuscular – active at dawn and dusk. They often hibernate between November and March, and can migrate to higher altitudes in warmer months and descend to lowlands in colder months.

Mating is usually in late summer and gestation around eight months. Females give birth in caves in spring, usually to twins, which are weaned by three and a half months but stay with their mother for two years.

Several moon bear populations face the risk of extinction due to loss of habitat through deforestation.

They are also affected by human exploitation in bear farms. Bear bile is a traditional ingredient in Asian medicine and is extracted from living moon bears. Caught from the wild with vicious traps, the bears are kept in cramped cages – their teeth and claws removed – and a metal catheter inserted into their gall bladders. It is estimated there are more than 10,000 moon bears held in farms in horrific conditions in China and Vietnam.

We are taking action to stop exploitation and cruelty towards farmed bears and support their rescue and rehabilitation. 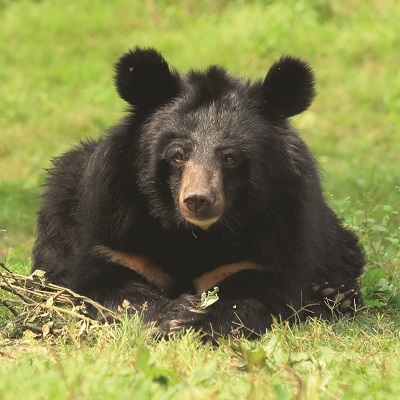 Born Free supports Animals Asia with their campaign to end the cruel practice of bear farming and also in their mission to rescue hundreds of bears in China. At the Animals Asia sanctuary, rescued bears receive expert veterinary treatment, enjoy nutritious food, lush natural foliage and the opportunity to swim in cool water.

Sadly, these bears cannot be returned to the wild, but at the sanctuary they are treated with the compassion they deserve.