The Ethiopian wolf is the world’s rarest canid, and a close relative of grey wolves and coyotes that colonised the Horn of Africa through land bridges. Ethiopian wolves are only found on the highlands of Ethiopia and are Africa’s most threatened carnivore.

Slender and long-legged with a distinctive red-tinged coat and bushy tail, the Ethiopian wolf’s narrow muzzle and widely spaced small teeth help to handle small prey which they stalk out in the open or dig from their burrows.

Ethiopian wolves live in close-knit territorial packs of up to 18 adults, with a strong hierarchy. They congregate for social greetings and territory patrols at dawn, midday and in the evening and rest together at night.

Packs are typically an extended family group, and members will assist in caring for the pups by helping to feed and protect them. Male wolves rarely leave their natal pack, whereas some young females may leave to look for breeding opportunities elsewhere.

The dominant female in each pack breeds once a year, typically during the dry season from October to February, and after a two-month gestation a litter of two to seven pups is born in a den. In order to avoid inbreeding the dominant female will only mate with the dominant male of the pack, and will also be receptive to approaches by males from neighbouring packs.

Ethiopian wolves are threatened by loss of habitat due to high altitude subsistence agriculture and overgrazing by domestic livestock. But most immediately by lethal diseases carried by domestic dogs such as rabies and canine distemper.

Road kills, persecution and hybridisation through breeding with domestic dogs are also a concern.

Urgent efforts are needed to ensure the survival of the endangered Ethiopian wolf, the rarest canid and one of the rarest carnivores on earth. 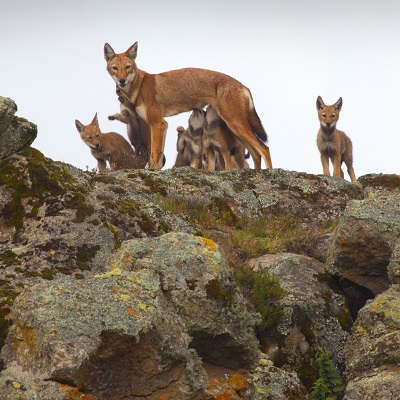 Ethiopian Wolf Conservation Programme (EWCP) was established by Born Free as a long-term partnership with Ethiopia and WildCRU at the University of Oxford.

Through EWCP we support conservation, monitoring and management of Ethiopian wolves, and disease prevention and control through vaccination campaigns.