The dugong, also known as the sea cow, is adapted for life in the sea with a streamlined body, wedge-shaped tail and strong flippers. As air-breathing mammals, dugongs must return to the surface every five to 10 minutes.

Feeding is the dugong’s principal activity, consuming up to 25kg of seagrass per day. If frightened, dugongs make a whistling sound while calves give bleat-like cries.

Dugongs typically have a 70-year lifespan. They are either solitary or socialise in loose herds of typically up to 30 animals, although herds of several hundred animals have been reported.

After a 13-month gestation, females give birth to a single calf. Reproductive and population growth rates are very slow, as a female will only give birth every two and a half to five years.

Dugongs face a high risk of extinction in the wild due to a number of factors including accidental gill netting, hunting for their meat and oil, and habitat and food loss.

Like all marine mammals, it can be extremely difficult to adequately care for dugongs in captivity – they suffer badly in confinement and have severely reduced lifespans.

We oppose the keeping of dugongs in captivity and work with like-minded organisations to raise awareness about the plight of cetaceans in captivity. 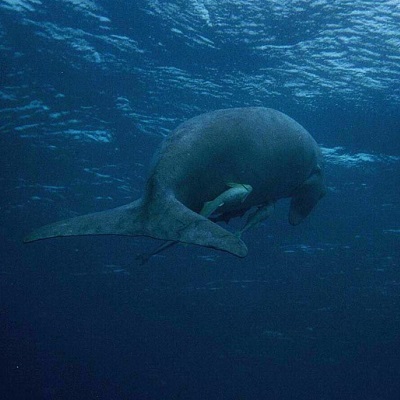 We campaign to end the keeping and exploitation of cetaceans – whales, dolphins, porpoises and dugongs – in captivity. We work to expose and investigate inadequate captive facilities, leading to tighter regulations and improved animal welfare.